What Makes The Chinese So Good At Table Tennis? 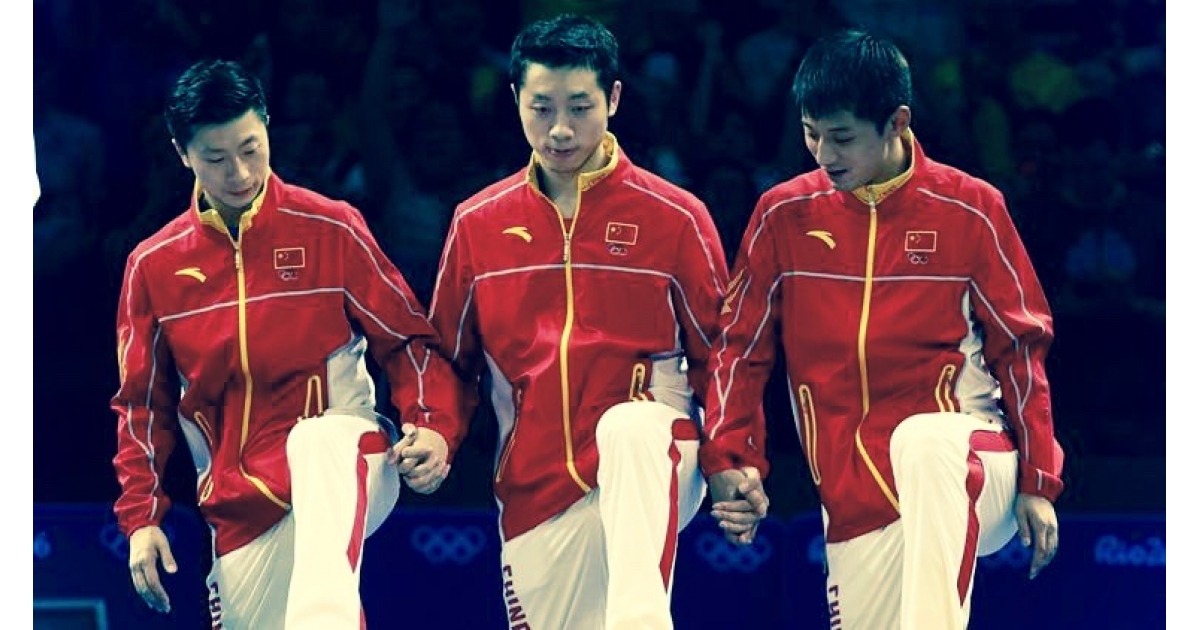 Ping Pang Qui (as the Chinese call it) is the National sport. Usually played on Indoor Ping Pong Tables and by absolutely everyone.

The Chinese are the best country in the World at Ping Pong, since the Rio 2016 Olympics it's official! However, this has not always been the case. In the 70's and 80's Europe, specifically Sweden were very strong in the game. The current world champion Ma Long continues to dominate as the world champion along with the whole Chinese team, their performances is near perfect.

So with that, I felt it was a good time in history to write an article on what makes the Chinese team an outstanding team to become simply world-class unstoppable players.

The main reasons why China is so good at Table Tennis Table tennis, or Ping Pang Qui as it is popularly known in China, is probably because it is the only national sport ingrained with Chinese culture. Since the 1950's Mao announced that table tennis is to be the national sport.

Since then the sport has been heavily funded by the Chinese Government and they make it part of their national curriculum in schools. It is played and taught in every school. This means that training schemes and training camps are provided for kids as after school activity or holiday camps to allow them become world-class players in the game by the time they reach aged 12. The government also realize that they have 1.6 billion people in China so space is not a luxury, and they need to be economical with space. In a gym hall you can put around 16 tables in a hall. So teaching the sport on mass scale becomes much easier to control. 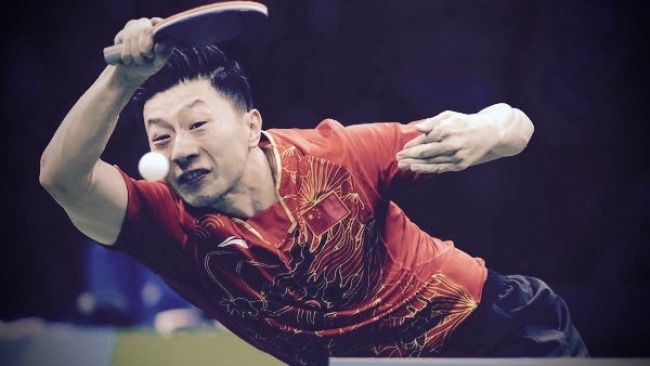 They have around 10 million people playing table tennis in the country at a pretty good level. Due to these reasons, the Chinese have come fanatical about table tennis and the top players are considered stars. Much like the west view current football star players like Ronaldo or Messi. The top table tennis players like Ma Long are earning a small fortune from playing table tennis. Deserving so, they train hard and win competition and pull in the crowds. Thousands of people turn up to watch these players when there is a competition.

These are a couple of main reasons as to why the Chinese so good at table tennis. People suggest theories like genes or average height of the people, but science disproves them all. However, culture does play a role in the outstanding results that Chinese players produce at an international level. The Chinese are very hard workers and have focus to develop their skills. So they practice for hours with specific training methods which have been passed down through the centuries. Kong Linghui was one of the most talented players in history and he has become their national coach. He has worked, trained and developed training techniques to push the Chinese national team to become world-class.

Cultural Reasons Why China Is Dominant In Table Tennis

For a long time, table tennis was the only game played in China, especially the older generations, they treat the game with some level of reverence because after all, it was the only game they could play. The principle at play here is that of excellence being borne of devotion to a single thing, because after all divided attention can never make one a master of any discipline.

Another cultural reason why table tennis is so popular in China is that it does not require much space to play in. Just enough space for a table and to move around for a game. Space is an issue in China considering that it is one of the world’s most densely populated country, if not actually the most densely populated. Because with table tennis you can really economize space, then the people absolutely love the game, and will go to any lengths to perfect it. 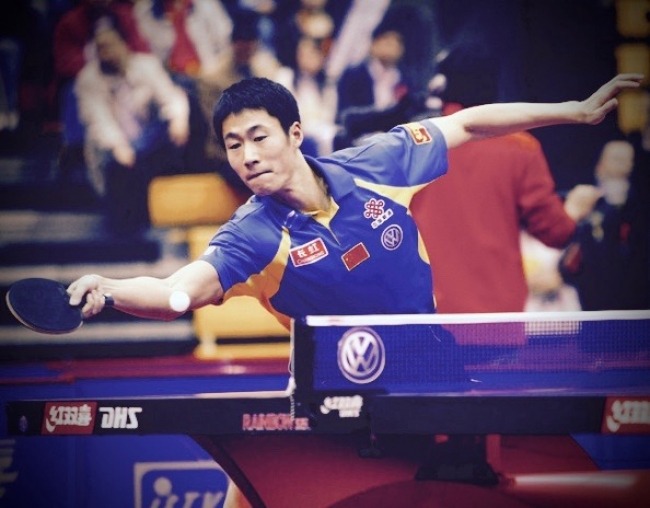 In addition to the need for being economical with space, table tennis is not an expensive sport. The only thing you need is a table, a bat and a ball. Any T-Shire and shorts will do, unless you're getting in to a competitive game. The affordability of the game opens it up to people from all walks of life. Little wonder then that the best players get to realize their talents from extremely young ages, which is a great advantage to their national team.

It's important to note, that tables are practically everywhere China. In public spaces such as business centers, parks, train station, schools, offices and shopping centers. With so much availability of tables, it's no wonder so many people love the game. It is part and parcel of their culture, with everyone having grown up playing the game and still played today by all generations. It's generally considered to be a great family sport, similar to most countries but specifically China.

It is however important to note that the game is consistently declining in popularity especially among the younger generation, who with technology have other things with which to pass time. Phones, music, movies, and such other distractions have increased the variety of leisure activities that young Chinese population. Kids have loads of distractions with the internet, which means, the game is a lot more popular with older population who had to rely solely on it as pass time in their growing up years.

Getting Into The Chinese National Team

It is important to understand how hard and the tough competition it is to get in to the national team. Only few select individuals are able represent the nation team in those games.The stamina, desperate, persistence and staying power are the qualities needed to compete at such a high level. With so many kids trying to get in China has a great depth of players from whom the national team is selected from. Due to the game being extremely popular, the country is full with so many good players desperate to get in, due to the money being so good if you win competition.

The national team consists of 96 players, 24 men, 24 women, 24 girls and 24 boys, all of whom have rightfully earned their place in the team. If any one of these players slackens in their game, they know they’ll be instantly replaced, so they have to continuously work hard to maintain their place on the team, and can never grow lazy on the job.

Stiga are the official supplier of blades to the Chinese National Team.

It has been said that The Chinese are so good at table tennis, that to prevent one country from winning the Olympic table tennis competition, that being China, a rule was laid down in 2008 that a country can only enter two players into the singles event. Nevertheless, in the London 2012 and Rio 2016 Olympic Games, China still dominated winning Gold and Silver medals. The Olympic committee could have possibly put even tighter measures in place to prevent one country’s dominance in any given game.

Although I'm not sure that these changes will really have an effect on the talent that is coming through China, rather it's about fairness giving other countries a chance to win. That said, it's a real pleasure to watch both Ma Long and Zhang Jike win the Rio Olympic games. Their performance and game is so strong, It's incredible to watch.

What Does It Take To Become A World-class Chinese Table Tennis Player?

I guess practise, practise and play some more. There is only one way to get into the national team: You have to start out at playing in your local league, winning a few competitions to get notices. At club level, they normally have a coach that spots you and will start training you to help you work your way up in to the national junior games.  All other factors such as age, build or fairness are completely irrelevant in the choosing of the team. This ensures that only the very best get into the national team, and there is no better way of ensuring a team’s success.

China is synonymous with hard work, and things are no different in the sport’s arena. The Chinese national team trains for long hard hours, both at the table and also for general physical fitness. The team trains for approximately seven hours every day, for most of the year, and this is no mean feat. Their day is split in to morning and afternoon sessions, sometimes with coaches or with their practice partners. 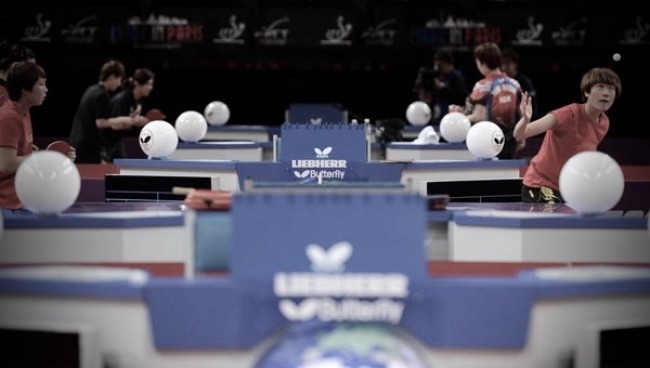 A methodology that China uses to perfect their game is that of players having permanent partners with whom they will always practice. Sometimes, if a player is too good, he will be pitted against two other players, each with different strengths and they practice together. This is a very effective strategy of bettering the best players, as well as strengthening weaker players, because after all, during practice, who can the best of the best players practice with?

In order to win the international games, the best player’s opponent is required to mimic the moves of the opponent that the player in question will face at the international arena, thereby learning beforehand the best strategies of beating the opponent before they actually meet, and what can breed as much confidence as that? There are a lot of other tactics that China uses to give it an upper hand in the games, such as the training of players from very young age, sometimes well before they are ten, as well as combining mental training with tactical training and repeating a given technique until they are perfect in it. 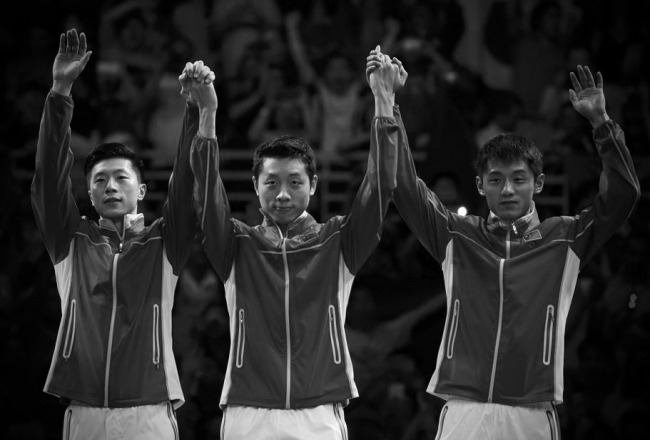 I think China will be at the top of the table tennis international scene for many years to come. They will be very hard to beat, considering their work ethics and national love for the sport they show no sign in slowing down. The west could learn from these players and study their training methods to beat the chinese at table tennis, but the west simply don't have the same funding in place to keep up with China and they will find it hard to get the coaching, sponsorship needed to raise their game and give them the platform to outperform the Chinese.

Also the Chinese are not messing around, they take this game so seriously as a nation, that it matters to them at all costs. The money is big for them in country and winning international competitions means good exposure for China and the Chinese Government. Something the government will be keen to promote on an international level. Table Tennis is great PR for China and long may it continue for them. They are definitely doing something right. It's an internationally loved sport and the west love watching China.

Political, Economical, Social and Technological implications are the main reasons as to why the Chinese people love table tennis. The game plays an indispensable role in the sterling performances that their players show the entire world. Coupled with hard work and the right coaching techniques, the question is, which country is going to come close to beating the Chinese National Team anytime soon?

If you are looking to emulate the Chinese and play on one of the best indoor table tennis tables to improve your game, take a look at our reviews!