How To Defeat the Chinese at Table Tennis: Team Secrets Revealed 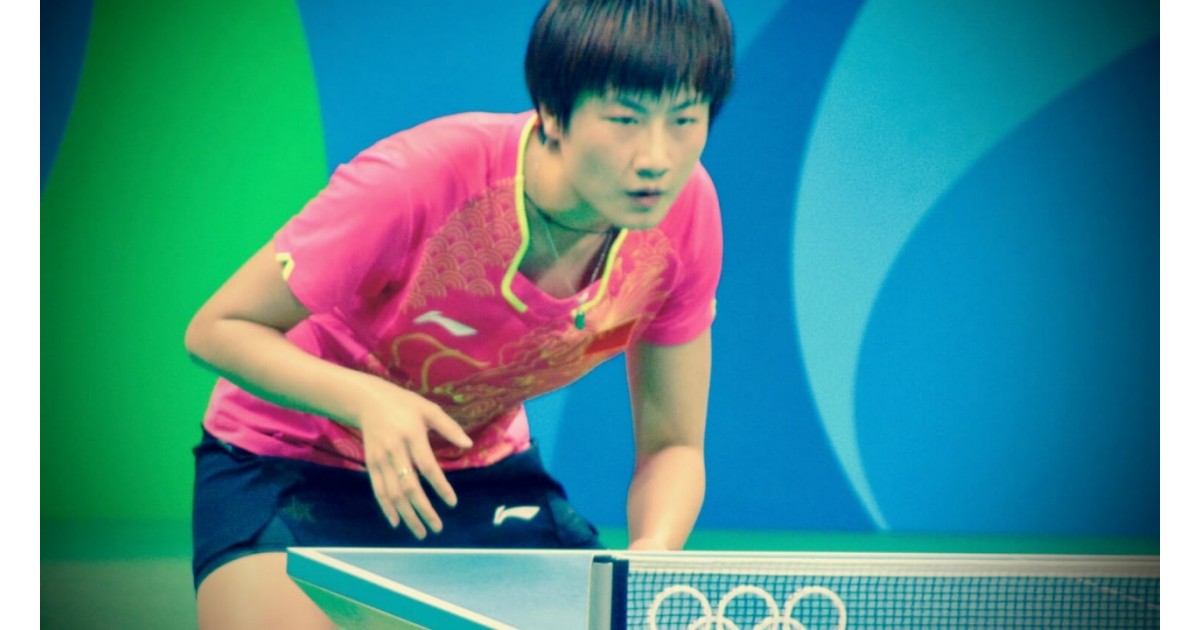 In most countries, the U.S. included, national teams are chosen through Team Trials, which is fair but does not always result in the most powerful teams. China, though, holds tryouts in which coaches handpick their players; they are extremely competitive and often consist of actual tournaments.

The Chinese often scoff at the Team Trials method of selection, claiming that it puts too much emphasis on trying to "fix" poor players instead of training the strongest ones.

Chinese athletes practice approximately seven hours a session, and sessions are held six days out of seven. Training sessions are usually divided into two sessions a day, and though the players get to rest after grueling tournaments, typically players only receive 12 off days each year. The most intensive training happens November through April.

Instead of training with their teammates like most of the world's teams, China's players train with professional partners, and each training session is individualized for one single player. Whenever possible, players try to train with someone stronger than them. For example, the team's women are paired with stronger men for practices.

Furthermore, these professional partners spend all their time watching the best players from the rest of the world's teams and mimicking their styles of play to help ready China's players to play against actual opponents. They do this by watching recorded matches and even traveling to matches all over the world to study other players' playing styles.

Because the Chinese competitors are some of the very best in the world, it is often hard to find people better than them with whom they can practice. They have a solution for this dilemma, though. They pair one athlete against two professional partners.

Of the two players, one is usually more powerful at forehand and the other backhand, though they are both exceptional players of both. They tag-team the single Chinese player, ensuring that he or she is challenged and has to bring his or her A game to beat them both.

Part of China's national team's training regime includes weekly meetings with a sport psychologist and a tactical team to help the players learn to strategize and create swift plans in the heat of the moment. While many of the worlds' teams utilize the psychologist, very few have their own dedicated tactical teams for this purpose.

As early as five years old, China's youngsters are tested to see if they have any sports acumen. If some are found to have a gift for sports, they are placed into elite schools that help them cultivate and hone those gifts. Nearly all the players on China's National Team were trained in these types of schools.

In fact, most all China's top players in all sports were trained in this manner. That doesn't mean that every player was trained this way. Some did attend normal elementary and secondary schools; however, almost every Chinese school has a table tennis team. According to a 2005 article on the subject, more than ten million people played on an actual, competitive table tennis team, and the numbers have only grown since then. 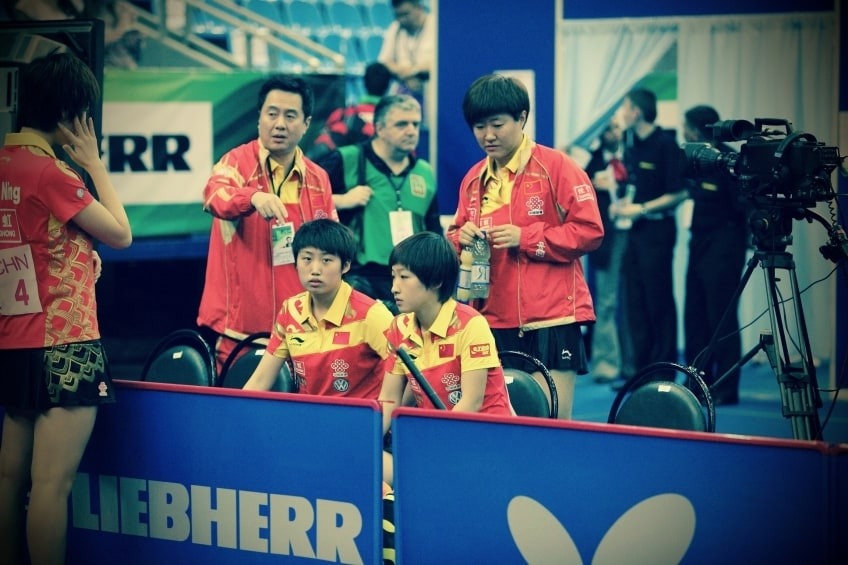 While some of China's success stems from their incredible multitude of players, numbers aren't all that make them the best. China's athletes have excellent technique. This was not always the case. In the early 1990s, China's National Team suffered a decline in skill and popularity because they were stuck in the old way of playing i.e. in the pips-out style.

Other teams had begun to experiment with inverted looping, such as shakehand, to win their games. China quickly caught on, though, and once they mastered the technique, they rose to the top once more. Since that time, Chinese players have been the first to utilize new techniques and practice up-and-coming styles. Their massive number of players gives them an advantage in this, too, though.

New techniques are always cropping up in the game, but because they have so many players from which to choose, they are able to choose only the very best - those who master new and effective techniques early. Those players who get stuck in the old ways of doing things tend to fall by the wayside, to be replaced by newer, better players. Furthermore, the Chinese are masters of serving and returning techniques.

There are other world teams who are effective in these areas, as well, but China is considered the authority. In fact, one thing most all table tennis players would agree on is that Ma Lin, a Chinese player, has the hands-down best serve in all the world. Before Ma Lin, it was Liu Guoliang, also Chinese.

As for returning, they are just as exceptional. Most countries learn to return an opponent's serve simply to neutralize that serve; China, though, uses the return as an offensive measure, a way of taking control of the game. Again, Ma Lin is the most prime example of this technique. Furthermore, the Chinese also spend an insane amount of time on what most countries consider the easy, boring stuff. Because the "easy stuff" is, well, easy, many countries' teams never practice it.

The Chinese National Team devotes a portion of each training session to practicing these basics, however, which allows them to perform like a well-oiled machine in actual matches. You will never see a Chinese athlete miss an "easy" hit.

How to Beat The Chinese at Table Tennis

So, how does a team beat another team that is in the best physical shape, has the best serve and return techniques, and holds the best grasp of the basics? The short answer is they don't. At least not very often. A great way to start, though, is by trying to match them in as many ways as is humanly possible.

Devote more time to training; study the basics and practice them until they are nothing more than reflexes; train with stronger players. And perhaps more importantly, create your team's own, unique strengths.

To improve a national team, countries need to start expanding their player pool. Try to recruit new players, particularly those who are younger and can be trained from an early age. Allow the coaches to have final say in which players are selected for the team.

Develop a secondary junior league of table tennis players and allow them to train with stronger, more experienced players from the national team. Then, when those junior players come of age, they can make a smooth transition to the national team and be exceptional players.

The Chinese National Team is one of the only table tennis teams that practices all year long. Most other countries, especially those in Europe and the U.S., only train together as a team a few times a year. It is only logical that a team training year-round is going to be better prepared than one training six weeks out of a year.

If other world teams hope to best the Chinese, they simply must institute year-round training. They can train as a team at a central location, and coaches from different countries can work together to arrange for their teams to compete against other teams in different countries for practice. Allowing countries to train together will benefit both teams and save money and resources.

One of the easiest solutions would be to bring over some of China's top active and retired players to practice against. This is a very affordable option, even for countries with limited budgets, and it is common sense that if you want to be the best, you need to beat the best. Training with Chinese players would certainly qualify. Many Chinese players would train with other countries' top players simply for the experience of seeing how those players play.

While most countries already utilize sports psychologists, teams should also hire tactical teams to assist them with tactical plays and responses. This team could consist of retired top players and/or active or retired coaches.

Develop Table Tennis Players As if in China

One way of developing a team is to raise the number of people in the player pool. The more potential players a team has, the more potential it has for finding star players. Once the player selection process is complete, teams need to dive immediately into training.

Study and practice the basics; compete in high-intensity matches; cultivate the most up-to-date and effective playing techniques. Play matches against other teams - this cannot be stressed enough.

One weakness the Chinese National Team has is that it practices almost exclusively with other Chinese players. If other countries would branch out and play regular matches against other countries, they would have a huge tactical advantage over the Chinese.

There are tons of options for mixed-match practicing, such as any number of table tennis leagues, tournaments, and regional qualifying matches. There are a ton of amazing German leagues, and the ITTF Pro Tour is always a great option for sharpening skills and learning to compete.

Perfect Chinese Technique then Create Your Own

Technique is something that cannot be hidden. Any player can learn any specific technique simply by watching how the top players are playing their matches. However, it takes a lot of hard work and practice to perfect those techniques once they are learned.

However, copying the techniques of other players isn't enough. Teams must mimic the most effect techniques used by top players on other teams, but they must also develop their own. In the few instances in which China has lost important matches - i.e. the loss to Hungary in the 1979 World Team Championships or the several losses to Sweden in the 90s - it has been because they were blindsided by new techniques they had never before seen.

To beat the best team in the world, it takes some ingenuity. Two of the U.S.'s best players, Eric Boggan and Dan Seemiller, were actually very good at this. They often mimicked the most effective and up-to-date techniques of top players around the world, but they both added their own unique techniques to the mix. Seemiller developed what later became known as the “Seemiller” grip, and Boggan used Seemiller's technique and built off of it for himself. These two players skyrocketed the U.S. team in 1985 to a level of greatness the U.S. had never been able to achieve. Sweden, Germany, and Hungary are also notable for their ability to integrate new techniques in with well-known ones.

Is it Really Possible to Defeat The Chinese?

Hoping to defeat the Chinese National Team is a big dream and not easily accomplished. However, that doesn't mean it can't be done. It's going to take a team capable of not only matching the Chinese in their greatest strengths but also developing advantages of its own. It hasn't been done yet, but who knows what the future holds!