When it comes to playing table tennis, the basic equipment you will need is pretty standard - the table with a net, paddles for each player, and a ball. However, there are many companies that produce the standard equipment, and choosing the right table tennis products from manufacturers is incredibly important.

The Rubber and the Blade

If you are a table tennis aficionado, you already know the terms "rubber" and "blade" when speaking of your table tennis paddle. For those of you new to the sport, a definition might be required. The blade is the actual paddle; the rubber is the type of covering that coats the paddle and acts as its playing surface.

There are many different types of blades, and they are usually categorized based on their speed, which depends on a combination of both blade and rubber. The main types include:

Defensive blades are generally slower in speed, but they give you the most amount of control. They are great for beginning players or players who generally play defense.

All-Around Blades are about mid-level in speed and control. These are used by players who play offensively and defensively in equal measure.

Offensive Blades are hands-down the fastest type of available blade, but the enhanced speed means you have less control over them. These are used by mostly offensive players and should not be used by a beginner.

Although table tennis rules state that the majority of any blade must be made up of wood, other materials - most notably acrylate and carbon - are used in the middle of the blade to achieve different effects. However, if these materials are visible, the blade is rendered illegal. A new material known as glass fibre is quickly gaining popularity in the table tennis world. It adds both stability and speed to the blade while reducing its weight. It also enlarges the "sweet spot" of the playing surface but still feels like a typical wooden blade. 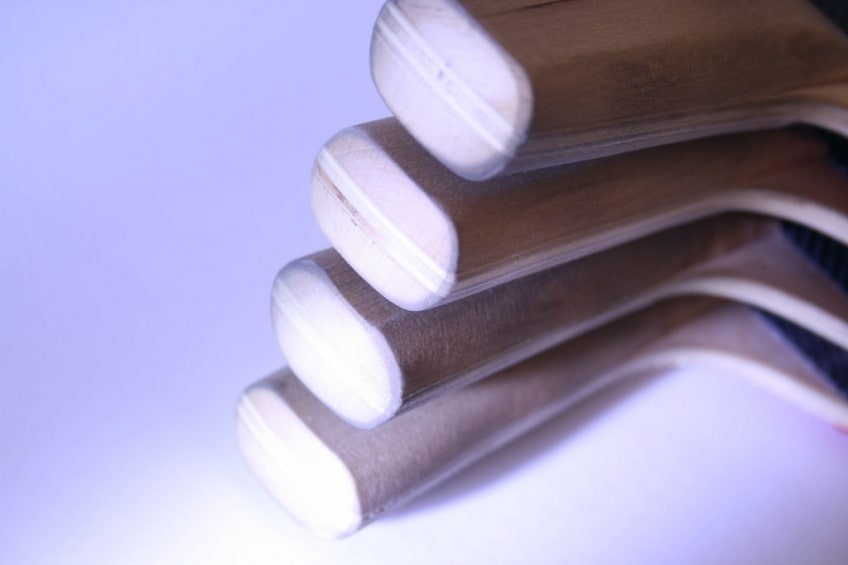 There are two main types of rubber - inverted and pimpled. Inverted rubber, sometimes referred to as smooth rubber, is actually just pimpled rubber that is inside out, so that the underside of the pimples is facing outward over a spongy layer. The spongy layer serves to add either better control or faster speeds, depending on exactly how it is made. Inverted rubber is also stickier than pimpled rubber, which helps players make better spin shots. Beginners are encouraged to use this rubber because it adds more traction and makes it easier to hit the ball in the desired direction.

Pimpled rubber is covered in something called "pips," which are basically tiny cylindrically-shaped objects that give the paddle an uneven playing surface and help players who prefer to play defensively. The so-called "pips" can be either short and thick or long and thinner, although rubber with long pips is currently being contested as illegal in league, tournament, and championship games.

Defensive players are generally the only players who use pimpled rubber, and it isn't recommended for beginners. When playing table tennis in your garage, the color of your paddle doesn't really matter; however, in league games, one side of your paddle must be covered in red rubber and the other side in black. The rubber also has to be two millimeters thick or less (four millimeters or less for rubber and sponge combos) to be legal.

Furthermore, there is a system of rating for rubber; it is based on both spin and speed. This system is a standard 1-10 scale, with ten being the quickest and most easily spun. If you are new to the game, don't worry. Most manufacturers allow you to test out their products before purchasing them. There are also many online and real-world communities where players can get together and talk about and compare various brands of products. 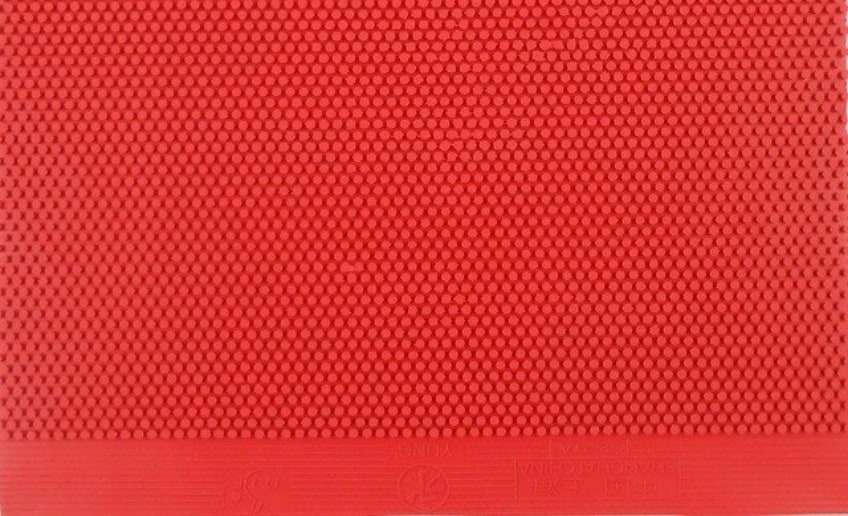 Applying your own rubber or changing your paddle's old rubber can make a first-timer nervous, but it really isn't that difficult. For replacing old rubber, follow these simple steps:

During this last step, be sure to use cardboard or some other material underneath your paddle so that you don't damage your countertops, tables, or whatever surface on which you are working. Furthermore, be especially careful not to nick your blade or cut your paddle while trimming off the excess rubber.

Like rubber, table tennis balls also have a rating system, but this system uses stars instead of numbers 1-10. The highest-rated balls always have a three-star rating.

Because table tennis balls are relatively inexpensive - the most expensive ones are usually only a dollar or so per ball - you should always choose balls with three-star ratings. Balls with lower ratings are prone to breaking or denting. High-quality balls can last a long time, as long as they are cared for properly.

Some steps to remember when taking care of your table tennis balls:

If you do those four simple things, high-quality balls can actually last a long while. Ball colors aren't important when practicing; however, you might want to use orange or white, which are the two legal colors for real games, so that you can get used to seeing them and picking them out of background colors.

It is important to ensure that your practice table and net are the same size as a regulation set for games so you don't get used to practicing on the wrong sized table. Tables should be nine feet in length, five feet wide, and two and a half feet tall. As for the net, regulation height is six inches, and it must also stretch the full width of the table and six inches off either side. The surface of regulation tables is usually either green, navy, or black and must be non-reflective.

Despite all nets and tables having to adhere to these regulations, they still come in widely varying qualities. In fact, some of the highest quality tables can cost upwards of $1000! A good net can set you back another $100, as well. For most people who want a table in their homes, the cheaper tables work fine. For professionals needing a practice table in the home, though, higher quality tables are needed. Tables should also always be set up on some type of flat, hard flooring, such as concrete, linoleum, or wood.

Paddles are generally sold pre-constructed, which means the rubber comes pre-applied to the blade. This is typical in America, but in other countries where the game is a truly competitive sport, blades are almost never sold with the rubber on them because professional players want to hand-select their rubber and glue it on themselves. These types of blades and rubber are far superior to the cheap, pre-assembled kind popular in America.

Even American tables are sub-par and not worthy of professional athletes. If you are just starting out in the sport and want to buy quality equipment, the initial investment can be expensive. Good, durable blades are around $40 on average, and remember, those do not include the rubber, which can be about $25 or more. A good, regulation-sized table is going to run you about $400, and because they aren't readily available in America, you're probably going to have to pay some shipping costs, as well. Used equipment is cheaper, but you always need to double check their conditions.

As long as you take care of your equipment and don't treat it roughly, it can last a long time. You can even buy things to help you keep your equipment in top shape, such as edge tape to help protect your blades, sponges to clean your rubber, and protective cases for storage.

Nets should be stored properly in a dry, sparsely used area when not in use, and tables should be cleaned before they are put away somewhere dry and safe indoors. Never store your table tennis table outside! Condensation, rain, animals, and all manner of things will damage it if you do.

Balls should be stored inside a case - not a plastic bag! If you do all of these things, your equipment should last you for many years.

A great guide to the basic

Is It Worth Buying The Stiga InstaPlay Ping Pong Table?

How Great Is The Stiga STS 420 Indoor Ping Pong Table?

How Good Is The Newgy Robo-Pong 2040 Ping-Pong Robot?